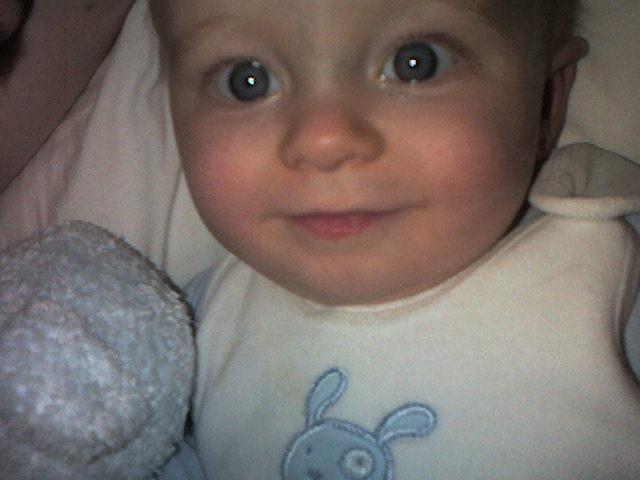 I was 17 when I found out I was pregnant, and 18 when Leo was born. I didn’t know what gender he was until he was born so it was even more exciting.

Labour was 6 hours long and towards the end my mum said that his heart rate dipped and mine went through the roof, I opened my eyes after a quick blink and there was a room full of doctors and nurses who told me I had 10 minutes to push or I was going to theatre to be assisted. I gave birth to my gorgeous boy 2.36am on 29th December 2005 weighing 6lb 14oz.

A few of my online friends were pregnant at the same time and we used to chat every single day. One lived in Northampton and the other in Oakham.

When we was talking about milestone’s online i soon realised Leo wasn’t doing the same things my friends babies were doing and by 9 months he still wasn’t sitting unaided, I took him to my health visitor and got told he will catch up, give him time, boys are slower then girls. doesn’t really help as both my friends babies are boys!

I took him back at 10 months and 11months and 12 months and he still wasn’t sitting up. My health visitor then referred me to the hospital with him and we received our appointment for April 2006 Leo was 14 months old by then and still not sitting up.

We literally went in to the appointment dumb thinking it would be something as simple as casting his legs as originally we thought it was his hips. A Few reflex tests later and the Consultant asked us if we had a occupational therapist ,physiotherapist and a social worker in place?

I replied quite confused and asked why I would have all them involved? and his reply was ‘well that’s normal procedure for children with cerebral palsy to have the teams in place.’

And that my friends was how my boy got diagnosed with Spastic diplegia cerebral palsy.

I remember asking if he would walk, talk, eat on his own using a knife and fork etc and his reply was I cant answer any of them but please don’t look on the internet, and wait for the referrals to come through.

I rang my health visitor devastated as I knew nothing about CP and she had everything in place within a hour and Leo had his first physiotherapy session at 15 months. This is when we met Jayne who has been with Leo from the start and still is now.

Within 4 weeks at 16months Leo sat up unaided, I will always remember that day.

It wasn’t long before he also got measured up for his first pair of splints to help him get on his feet they were so tiny. At 3.5 years old Leo started to use a walking frame and got his first wheelchair so no more being judged for having a 3.5 year old in a pushchair!

I remember asking Jayne when he was 2 when she thought he would walk and nothing can prepare you for what she said next.

‘It’s really difficult to tell as every child with cp is different, I think if he does walk it would be by the age of 7-9years old and it might just been too hard for him and he may favour his wheelchair more.’

What the actual f@!K was she saying to me? I understood but found it incredibly hard to take in that my son would most probably never walk! 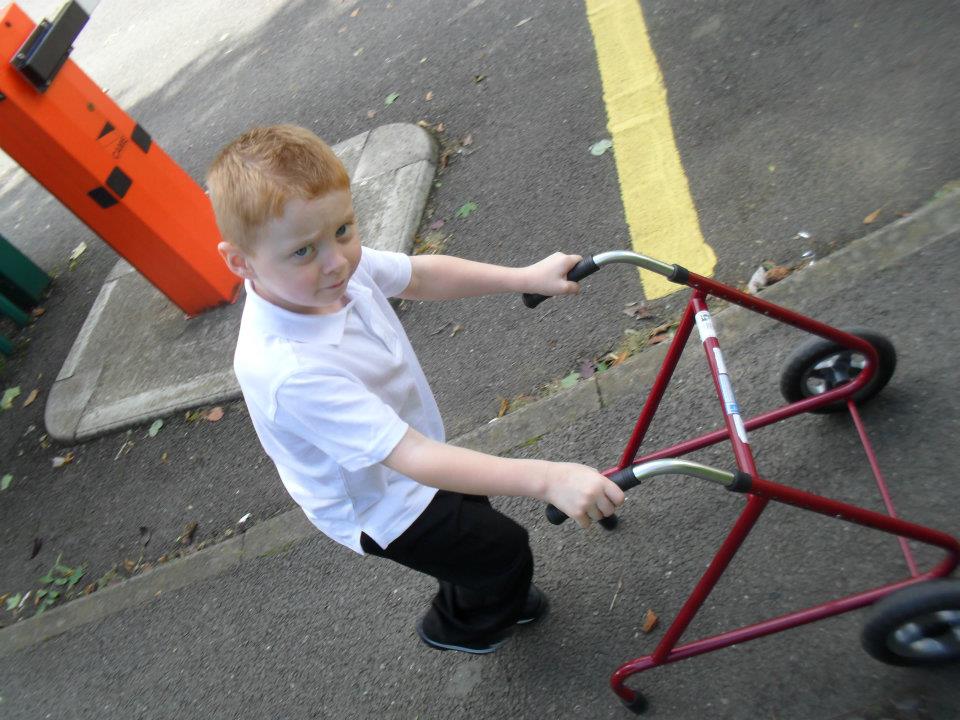 As Leo got older he got heavier and I had a tiny frame so lifting him in and out of the car got increasingly difficult, I used to get filthy looks when using the blue badge with him.

When Leo got to about 4 years old he was really good at high knee crawling and that’s how he got about.

I also remember one particular day, it was a lovely warm day and loads of children were playing in our car park and leo was desperate to join in so I thought sod it .. go on and play but stay just outside the garden gate so I can see you. (car park was a secured locked one with slow opening gate that creaked). Then I heard crying that sounded like my boy so I ran out and he was crawling towards me with tears streaming down his face and muddy hands and cut knees where he had tried to crawl  fast to keep up with everyone but just couldn’t.

I’ll tell you something now, My heart SHATTERED and I just cried for him.

I remembered registering to the Scope website a few months back as they had a forum for parents with cerebral palsy, I remember seeing a lady post about a operation in America that could help children with cp walk. At first I thought it was a load of bollocks, its brain damage so I just browsed past it.  After experiencing what Leo had just gone through I was more desperate now to try anything and I remembered the post. so I messaged the lady and she sent me through all of this information and I forwarded to my mum to read too. My mum called me back but she was speechless and explained it all to me and said its definitely worth a go. So I emailed St Louis Children’s hospital in Missouri and they sent me a form to fill out and send back with a video if leo trying to do certain things like crawling, rolling, standing if he could ( leo couldn’t stand or walk unaided at all )

We did everything they asked us to do and sent the forms. In the mean time I had spoken to Leos consultant who was against the operation as she had never heard of it before and that it was in a different country. well I went against what she said as I wanted to look my son in the eyes when he was older and tell him I did everything I could to help him walk.

I remember the day I received the email from the hospital saying Leo would be a good candidate for the surgery which is called Selective Dorsal Rhizotomy. I literally couldn’t of been any happier I finally had some hope for him.