Today we surprised the kids and took them for a day out to Drayton Manor Theme park in Tamworth.

Halfway to Drayton Manor I did think about whether or not we should play an April fools trick but I couldn’t bring myself to do that to them. The drive took us about an hour and a half to get there from Peterborough. None of us has been before except for David and he last visited over 20 years ago so he could barely remember anyway. Leo has good and bad days with his legs so we always take his wheelchair with us on long days out especially theme parks and attractions.

As we arrived at the park we followed the road around to a huge field that the stewards were directing the cars to park on and we were directed to the disabled parking which is situated literally outside the entrance and had plenty of disabled spaces. The car park is free for all guests visiting the park.

By the time we got ourselves sorted wrapped up warm and into the park it was 11 am. Frustratingly, Leo forgot his coat, even after being told 4 times before we left the house. Luckily, he had a hoody on with a scarf and gloves. It was COLD, but at least it wasn’t raining.

We went straight to Guest services (located in a building that looks like a lighthouse)and with Leo’s Dla letter they gave Leo a wristband along with a carers card that allows you to get on to a ride with a lot less queuing via the exit of the ride, which had 10 uses per party. The 2 excluded from the card was The Haunting and the Ice Age 4D movie. They can also measure your children’s height so you can plan your day better, and they also have maps for the park and cash machines. The maps do not have the ride heights on them, but the website has a handy link to look at all rides with height requirements within a single list. 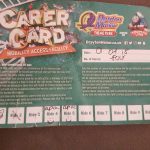 Emily had been asking to go on the unicorn ride, by which she meant the carousel, so we headed there next. The queue wasn’t busy so we joined it normally. Leo has never really liked riding the horses on the carousels, so he just sits in the sleigh and after hours of Em going on about this ride she freaked out and wanted to get off. I managed to keep her on and she enjoyed it in the end.

By this point it was getting on for 11:45am, so we found ourselves a table and sat down to eat the awesome picnic I had packed. Then David took the picnic bag back to the car so we didn’t have to lug it around. Being a family of 5, buying food and drink from theme parks can get really pricey so we always pack a picnic and extra bottles of drink. 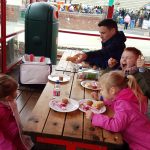 I thought the park was going to be absolutely massive but I was pleasantly surprised that it wasn’t, which made it very manageable for little legs. The park is split into three main areas; Thomas Land for little children, ideal for Emily and younger (but Lydia and Leo really enjoyed it too). Family Zone, which was perfect for slightly bigger children, Lydia and up (as on some rides Emily was too little) and Thrill Zone, aimed at children 1.2m and higher, with some of the more extreme rides being a minimum of 1.4m. We covered most of it and got on to most of the rides – at least those that the children wanted to get on. David and I took it in turns going on rides with Leo, so the other one can watch the girls. Lydia wanted to go on everything but couldn’t because of safety height restrictions, which is understandable (although she didn’t think so) and there was still plenty more for her to enjoy.

The children really enjoyed all of the rides they went on and even Leo, bless him, who got dragged on to some of the smaller rides with Lydia, came off of them with a big smile on his face. Lydia loved every ride she went on, although she is particularly fond of rollercoasters. The older boys (which definitely includes David) really enjoyed the Shockwave, although some of Thrill rides were closed for maintenance, so they could not try them all. They even made sure there was enough time to go on it again before the end of the day. The Apocolypse was also a lot of fun, although David wouldn’t necessarily agree. Although, for a man who doesn’t like heights he went up the 54m, enjoyed the view before dropping like a brick while screaming like a girl (his words, not mine). I have to say though, the plummet is exhilarating and you cannot help but scream so he is let off… just.

There are games situated around the park where you can win GIANT plush goodies through various carnival style ball games. One such game had the plush figures from Monster Family, which my girls are obsessed with at the moment and as soon as they saw Emma Wishbone that was it, “Daddy, please win me an Emma Wishbone. PLEASE!!!” Which he did, not just once, but twice. They hadn’t put them down all day and have even gone bed with them. Games are charged at £3 for one go, or £5 for two.

Towards the end of the day, it was getting colder and the children started to struggle. Milly really wanted to go see the animals at the Zoo. YES, I did not know Drayton Manor had a Zoo.  We went to see the reptiles first so that we could warm up and the kids loved seeing all the different types of snakes, frogs, turtles, iguanas and we even saw two crocodiles. 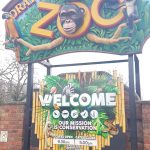 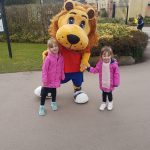 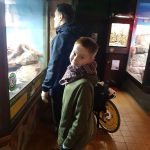 We also saw a tiger closer than I have ever seen one before, a lynx, lots of different monkeys, meerkats, reindeers, lemurs, parrots and then by this point we were so cold so we started to head back. We were gutted we didn’t get to see the rest of the animals but we needed to get in the warm. It gives us another reason to come back so we can finish looking at the zoo and when you visit, we recommend you plan in the visit to the zoo as it was quite large with a lot to see.

We had also promised the Knight Tribe doughnuts and David had promised Leo that they would go on Shockwave one last time. Quick stop to get doughnuts, and for David to act silly (again), then David went with Leo for the last ride and the girls and I headed to the arcade to hit up the 2p machines whilst we waited.

We are so glad we spent our Easter at Drayton Manor and we have had such a fantastic experience. There is so much to do there for everyone, be it animals, rides, games or arcades. There were also areas that were not open that when it is warmer we would love to try. The children had a fantastic time and have already requested that Drayton Manor is considered for another outing, something we will definitely do.

I have made a short video of my family enjoying Drayton Manor, I hope you like it 🙂

***The Knight Tribe were given family complimentary tickets, in return for inclusion on my blog and social media***